I finished my Honours degree at the end of 2017, I had thought about starting my PhD in 2018, but decided instead to have a break, to try to move away from academia and move forward in my life – get a full-time job, move out of home, adult things basically. I can tell you now that none of those things happened. But then maybe that me getting ahead of myself. Let’s see, I was on one tablet of Paroxetine at this point – a SSRI used for anxiety and depression. I felt a little more normal that I had for a while, and my concentration was great. I was writing a lot, and because it was the beginning of the year there were a few writing competitions opening up. I didn’t get through even the first round of one – the NYC midnight – but I didn’t let that dissuade me. I was applying for volunteer positions with queer organisations I wanted to be a part of, I was seeing friends new and old and I even applied for a job opening at Hachette.

I had a few parking fines – mostly due to carelessness on my part, and I was going to Brisbane as a gift to my GF for her birthday. I hadn’t anticipated the fines and quickly became stressed about money – I was still only getting a few days at my current job, and hadn’t heard back from anywhere I’d applied to. Then, suddenly, it seemed as if all good things were happening at once!  I heard back from a tutoring company I applied to, and had two students within the week, I entered a short story I had written and rewritten into the Underdog short story competition and in the process made it to the final twelve. My GF and I started to think about bout opening up our relationship and becoming polyamorous – we had fought earlier in the year but had smoothed it out well enough, my mental health had stabilised or so we thought.

My parents went away on holidays for a week, and with no one in the house I quickly became depressed, whether from the loneliness or simply not having much to do I don’t know, but the day before a few days before SMASH made a mistake and broke one of our poly rules. The GF and I took some time apart, but I was a wreck for the next few days, I have never been able to handle uncertainty well and with so many people telling me what I had done wasn’t that bad, and other’s telling me it was, I very quickly got into my head about it. I had gone up to two tablets of Paroxetine earlier in the year, as they just seemed to have stopped working as well, and they really pulled their weight, especially because it was around this time that I went up to three. I think it was around then, I honestly can’t remember how much I was taking when. I was depressed, and I thought that was enough of a reason for me to feel the way I did, not only because every time I would try to crawl up out of it, The GF would admit her worry that I would only sink again. I felt like a self-fulfilling prophecy – I had been bad for so long, that it just wouldn’t do to start defying expectations at this point. So that’s what I did. I let myself blame my actions on the fact that I was mentally ill and I dragged myself down to meet expectations of me. This was probably also compounded by the fact that I felt I wasn’t “that bad,” in the same way that setting your small house on fire with you in it might not be as bad as your friend setting fire to their larger house with them in it. Anyway, depression sucks and I let it suck me in again, and so, I fucked up, again, except this time I didn’t think I had until I was informed, regrettably, that I had and could we please go on another break while the GF sorts out whether she can keep going on like this? Do I remember properly the order in which these things happened? Not quite. But later, maybe a day before I was supposed to fly up the coast to a friend’s wedding I knew I couldn’t handle these breaks and the not knowing – I am not good at mulling things over in my head, I am not good at fixing things on my own, and yet that it what I felt I was being asked to do, and I knew it in my bones that it would be futile. And so I mourned. 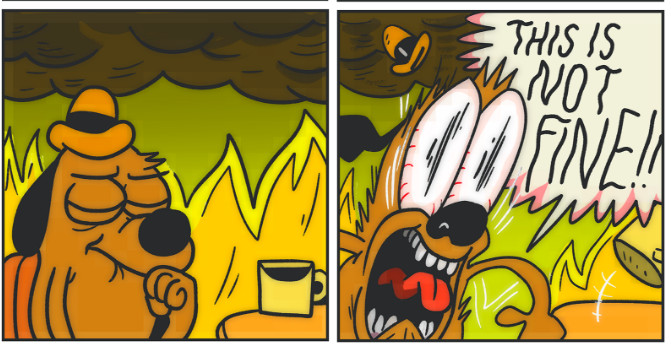 Then there was that night I knew that I wanted to cry but I couldn’t and all that I felt was emptiness and I couldn’t feel anything. My hands and feet had begun to feel like they had a soft sort of pins and needles in them occasionally. I was cutting carrots I think, or maybe something else, it must have been something else because I was making puff pastry pizza but I had pulled the second biggest knife from the knife block and it was still clean I think, else I wouldn’t have, but all I could think was that my insides ached with not being able to feel anything and even though my eyes hurt I wasn’t able to cry. And then I failed. I failed to press the knife hard enough to break skin, I failed to keep my hand to stop from shaking, I failed to stop, I failed again and again and again, Finally the tears came, from my failure perhaps, from how useless I felt, how I failed to do even this one simple thing that was really, it seemed, the only inevitable thing for a person with depression to do. And so my knees gave way and maybe I screamed more than  cried with my head against the kitchen cabinets and my legs against the cold tiles. I sobbed because finally I supposed, my heart was broken and I knew I couldn’t go back. And when the hurt faded I wrapped myself in my softest blanket and I forced myself to eat, and I watched Ouran High School Host Club because it makes me happier than anything else, and I share good memories of it, and then I went to bed. And that’s how I failed to kill myself. I have never been more proud of myself than I was picking myself up off that floor. 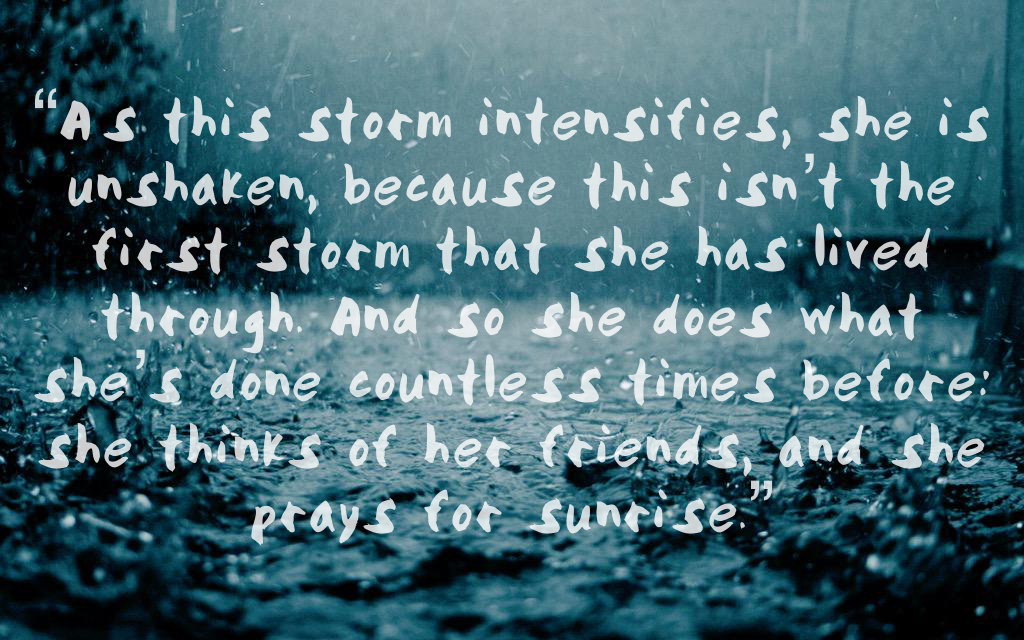 It might have been the next day, or it might not have been when I spent the whole day with my head saying “I want to die” over and over again. I was in a tropical paradise, I put on a brave face as I went shopping with my mum, but I broke down in change rooms and told my closest friend how badly I wanted to die, how I had hurt myself and only wanted to do it again, and the first thing I did when I got back home, with my parents still away, was to do just that, except this time there was no rush, no feeling behind it, I was just a girl putting a knife to the crook of her arm because that’s what some songs told her depression was like when she was fourteen. And that’s when I knew that I could survive anything because I had first survived myself. I got my first tattoo this year – a sprig of saltbush – and when I told the GF its meaning she boiled it down to “it’s a depression metaphor” and it is, because saltbush survives in otherwise toxic environments and turns arid ground fertile. And I was, I was growing because I had survived. But I still had more growing to do first. The GF broke up with me. Ironically about a week or so after Ariana Grande released “thank u, next,” but I wasn’t quite ready for it yet. First I had to get through PAX, made easier by seeing my lovely friends, and by the fact that I was in a different city. Coming back to Sydney was worse because there is apparently nowhere in the city we hadn’t been together, and everywhere was full of memories both good and bad.

My friends made sure I kept busy, old friends and people I didn’t know that well but had wanted to become friendlier with got in touch and slowly I began writing new memories over the old. Most importantly, I began writing again – you know how they say only the tortured artists are the useful ones, well when I am depressed I’m entirely bloody useless and can’t do anything other than stare at the wall or scroll through tumblr for days on end. I started drawing, and taught myself watercolour. I picked up my guitar for the first time in a while, and I listened to metal in my car at top volume without anyone asking if it was because I was angry. I had another short story published, this time in a self-published book from Better Read Than Dead, and have been editing an article for AniFem. I started work on two video games, a silly romance novel, and a comic. Best of all, I started the process to apply for my PhD. After spending a year hearing about how it would only make my mental health worse, I finally believed in myself enough to try it anyway. I made a mistake or two and got through them with the help of my friends. I enjoyed Christmas day for the first time in years.

I didn’t end this year where I thought I would, but I think I did so much better than I ever could have dreamed. Now, hopefully 2019 is the year of a full-time job and moving out…among so many other things that I look forward to.

I’m finally getting over my fifth horrible cold of the year!! Because I’ve been so worn and there’s been so many big changes in my life I’ve found myself turning to some old favourites and my og comfort genre - high fantasy. I’ve been alternating between Cecilia Dart-Thornton, The Wheel of Time and whatever else happens to take my fancy.
I love these manga so much
Found out about this via Twitter thanks to @silviamg.author and it was an instant buy for me - a queer retelling of Dracula’s voyage to England??? Yes please!!
“Cis folks get to be understood as affectively complex and ambivalent in relation to all sorts of phenomena that are supposed to make one happy… Why not trans people?”
Fun, creepy and queer as hell. What a great read, I can’t recommend it highly enough!!
…and for a moment I forget to worry.
%d bloggers like this: