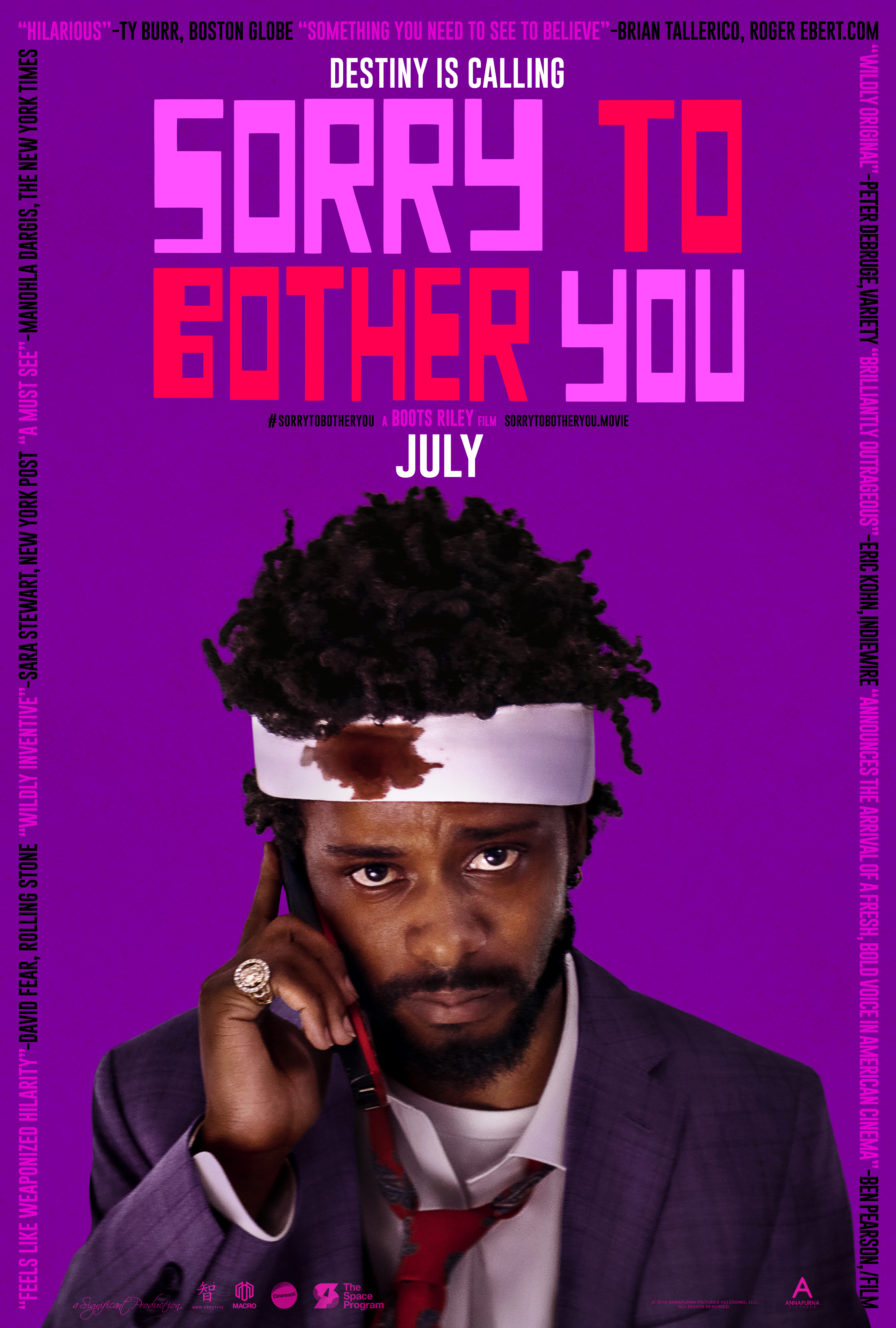 What Happens?
Cassius “Cash” Green (Lakeith Stanfield) needs a job, and soon – his car is barely running and he’s four months late on rent, the rent that keeps his uncle, Sergio (Terry Crews), with a roof over his family’s head, so when he gets a job with telemarketing agency RegelView it seems like all his dreams have come true. Except they don’t pay except on commission. When Cash is offered a promotion the day he and his friends organise a strike, he must work out just how far he will go, and just how much it can cost to keep above the breadline.
tw: abuse (for art), police brutality, slavery, heavy drug use, sex, human experimentation, racism

The Verdict:
They say a picture speaks a thousand words, so my response to Sorry to Bother You can be articulated by this single gif:

I think it’s safe to say that I’ve consumed some pretty “wtf” media this year, but this one really takes the cake. It is an absolutely brilliant satire that deconstructs race relations, classism, consumerism and anything and everything in between. There were horrifically serious moments interspersed with times I could only laugh – whether from hysterical nervousness, the release of tension, or genuine humour I’m still not entirely sure. What starts as an apparently simple “boy has girl, boy loses girl, boy gets girl” film, soon turns to a close examination of the human condition and the scarily possible futures we might have ahead of us.

Sorry to Bother You is vaguely futuristic, but so subtly that it could easily be today. The divide between poor and rich is marked, shown through Cash’s daily journey to work, which takes him past homeless slums and glassy skyscrapers alike. The way that media operates and, particularly, the way in which large corporations use the media and “spin” tactics to make themselves look good, is an alarming mirror to our own reality. This is particularly noticeable at one point (which I won’t mention), but also in the way that the media covers the wage protests. The attitudes of police to non-violent protesters is scarily accurate, and reminded me strongly of scenes from the book Anger is a Gift, which I read earlier this year, and was noticeable for its depiction of police brutality.

The film uses the vehicle of “telemarketing” – something we are all familiar with and despise – and applies it to larger ideas. The surprising and hilarious contrast between Cash’s regular voice and his “white voice” starts off as a supposed gag between black men, but quickly becomes emblematic of a much more sinister, casual racism.

On a lighter note, Tessa Thompson is in this movie and, frankly, I am a bisexual wreck. She plays an artist who uses her work as political commentary, even if some of that is oddly obscure – in one scene of performance art she invites people to throw items, including water-balloons full of blood, at her. Her character also wears some of the most fantastic earrings I have ever seen, and I want to know where I can purchase any/all of them. Armie Hammer is also absolutely fantastic in his role of eerily familiar megalomanic CEO “Steve Lift,” displaying a carefree attitude to money and human life both.

It was hard to tell what was real and what was pure fever-dream with this movie. Sorry to Bother You makes you think it is going to be one thing and then turns out to very much be something else, in a strongly visceral way. It punches you in the face and then lingers in the back of your head, so that you can do nothing but think about it in the smallest hours of the morning. I could write chapters about different scenes and themes, but to do that in any kind of detail would be to give everything away, and this really is a film that needs to be experienced rather than simply talked about. Unfortunately in Australia Sorry to Bother You is only available to see at a very few cinemas, but if you can get to a showing, then go, your brain might explode, but it will be worth it.

One thought on “Sorry to Bother You”

❤️💛🖤Always was, always will be🖤💛❤️
Not under cats?
Crystal Kingdom is where I started getting really invested in TAZ, it does the perfect job of tying in the previous arcs and establishing a larger plot arc. Also it introduces one of my favourite characters so there’s that!
I’m officially in love with Harrow the Ninth! Will fight for my autistic baby at all costs
The Vampire Chronicles, especially Queen of the Damned and Blackwood Farm, were absolutely formative reading for me. Anne Rice has left behind an amazing legacy.
Its ok y’all can stop telling me to read it now
Loading Comments...
%d bloggers like this: