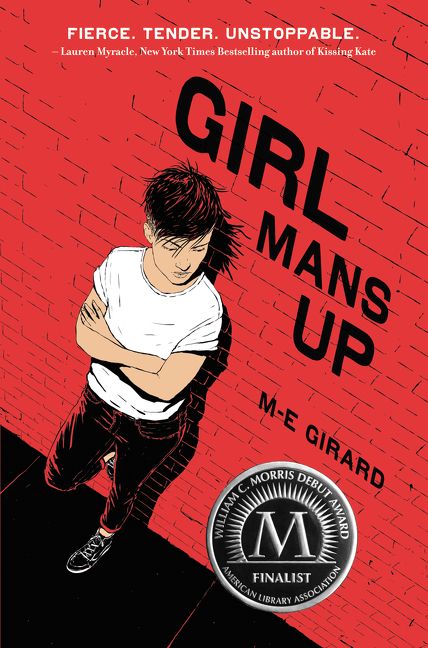 What Happens?
Pen is sick of trying to live up to everyone’s expectations. No she doesn’t want to be a boy, but she’s not entirely sure she wants to be a girl if that means wearing skirts and just being what everyone wants her to be.

The Verdict:
Oh wow this is so hard. I hate giving bad reviews but, for once, I gotta. I was really looking forward to reading this. In fact, Girl Mans Up had been on my radar since I knew it was coming out, and you have better believe I was in line to get a nice hardcover ASAP. A YA book with a butch main character? Yes please! Sadly enough, this book started as intolerable and only got worse from there. Pen’s friends are possibly the worst people in existence and honestly, I didn’t think she was much better. The girl suffers from so much internalised misogyny I wanted to reach through the books and shake her until her head fell off. It didn’t help that this didn’t really get rectified, or it might have, if I hadn’t given up and put the book down about three quarters of the way through. I think I gave it enough of my time.

Arguably, Pen does start to get better after she starts dating Blake and becomes sort-of friends with Olivia – having girls in her circle really improves her character and puts paid to the whole “I’m only friends with guys because girls are always starting drama” nonsense. And I mean nonsense, both in the fact that it simply isn’t true and because Pen’s frenemy Colby is the biggest drama queen ever. I truly don’t understand how they became friends, let alone stayed friends in a relationship that basically consists of him walking all over her. It would have been nice to see them getting along in ways that didn’t involve them bagging out women before their friendship fell apart.

As someone who really values familial relationships I also found Pen’s relationship with her family extremely problematic, and not just because  they were intolerant of her boyishness. I really liked Pen’s strong relationship with her brother, and so I felt that it was a bit weird that it fell apart so easily once he leaves home. There were a lot of emotions there that could have been explored or talked about, and while I understand that Pen’s response to her brother effectively abandoning her was pretty realistic for a teenager, I think that the writing of these parts could have been done better.

I have to say though, I loved Pen’s crush/girlfriend Blake. She’s described in ways similar to Enoby[sic] from My Immortal but my god if I wouldn’t have fallen head-over-heels for that brand of hot-topic babe when I was fifteen then I don’t know what would have done it for me.

The plot of this novel was only just unpredictable enough for me to keep reading, but for the most part it was easy to tell what was happening before the characters figured it out. This is one of my pet hates in a novel – when something is so immediately obvious to the audience but not to the characters, and then it gets dragged out for half a book while I sit and tear my hair out. I don’t mind the use of YA tropes when they’re done well – there’s a reason they’re tropes of course – but Girl Mans Up didn’t handle them well enough to warrant me finishing it. I was incredibly disappointed in the handling of this novel. My expectations of a novel with a masc-presenting girl as the main character were, admittedly, super high, but even as a general sort of read I was decidedly let down.

I’m finally getting over my fifth horrible cold of the year!! Because I’ve been so worn and there’s been so many big changes in my life I’ve found myself turning to some old favourites and my og comfort genre - high fantasy. I’ve been alternating between Cecilia Dart-Thornton, The Wheel of Time and whatever else happens to take my fancy.
I love these manga so much
Found out about this via Twitter thanks to @silviamg.author and it was an instant buy for me - a queer retelling of Dracula’s voyage to England??? Yes please!!
“Cis folks get to be understood as affectively complex and ambivalent in relation to all sorts of phenomena that are supposed to make one happy… Why not trans people?”
Fun, creepy and queer as hell. What a great read, I can’t recommend it highly enough!!
…and for a moment I forget to worry.
%d bloggers like this: