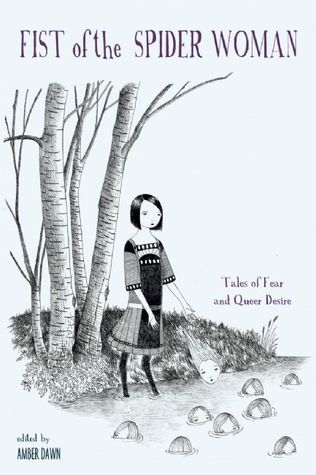 What Happens?
A collection of short stories based around horror and queer desire.

The Verdict:
Have you ever read erotica and thought, “hmm, this could use more fear?” if that’s you then boy have I found the book you need. Sexy and Scary, the tagline to Fist of the Spider Woman reads “tales of fear and queer desire” and it is not even mildly joking  around. be prepared for both more fear and desire than you actually signed up for, and to love every “boy i hope this doesn’t awaken something in me” moment. From monsters to government spies to ghosts, this anthology really does have it all.

Among all of this terror and grossness however, there is a sort of ridiculous delight in reading erotica for and by queer people – in a world where there are those who maintain that “coming out” as interested in kink is that same as coming out as LGBTQAI+ it is nice to have something so very different that we can call our own.

The opening short story, “Slug,” sets the tone for the whole collection with its story of a woman with violent desires who turns into a slug after is has sex with her. It is dark and completely mental but is not nearly the best work in the collection. After hitting you hard over the head with this story, the collection moves into only slightly more subtle territory.

My favourite story was probably “Shark.” It was an absolutely beautiful tales about sharks both human and animal and our attraction and fear of them. It is told from the perspective of a child who loses her mother and whose other mother finds a new paramour, with dark consequences. My love for this story is probably due to the narratives proximity to both the ocean and the forest – two of my favourite places that between them create a serene limnal space between land and water. As an added bonus, this story features a butch leatherdyke in a mothering role, something that is not often portrayed, even in LGBT media.

“In Circles” was another of my favourites. It is a creepy and strangely sweet story about Bloody Mary and an Intersex woman. Because of the Bloody Mary aspect, I did find this story creepier than many of the others – whereas many are more erotica with horror elements, this one definitely felt like the reverse. It managed to walk the line between horror and queer desire in the best possible way.

The story “Sido” features an American backpacker in  Paris who becomes trapped by her Parisian landlord.  This story is psychological horror at its best as well as the sense of something supernatural happening. We never really find out who Sido is or what she wants, and I think that’s part of what makes this story so truly creepy.

“Here Lies The Last Lesbian Rental in East Vancouver” like the first short story “Slug,” I found it a bit much, especially as it leaned very heavily into the erotica aspect, and not in a consensual way,  I found it a little bit messy and didn’t really have much idea of what was supposed to be happening until the last few pages, which actually turned out to be pretty sweet. Aside from all of the horror/erotica in this story there is also a discussion about the  gentrification of old houses and suburbs – particularly those cheaper run-down areas where the haunted and queer carve out a space for themselves – and, as someone looking for a place to live in Sydney, this very much hit home!

Featuring two transmen, “Conspiracy of Fuckers” started well and has some pretty great erotica, but the ending was very creepy (again, in a non-consensual way) and ultimately not one of my favourites. I think it only just missed the mark in building tension, leading to a very confusing and super squicky ending.

The story I found most disappointing was “Crabby.” I thought it might end up being scarier or funnier than it turned out to be, which is a shame because I think it was one of the weakest stories in the collection. In the end it was really only made memorable due to some of the visceral imagery it uses and my personal fear of parasites.