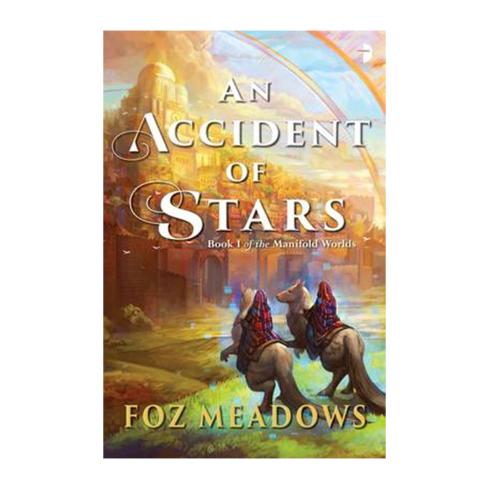 What Happens?
Saffron feels powerless. She is stuck at a school filled with boys whose idea of entertainment is snapping bras and flipping skirts, with a principal whose motto seems to be “boys will be boys.” So she can’t really be blamed for following Gwen, the older, elegant, takes-no-shit world-walker through a rip in space and into Kena, a world recovering from a civil war where the good guys accidentally put the bad guy on the throne.

The Verdict:
I have been meaning to read this since it came out, but, not knowing whether or not I would like it always held me off a little bit. If you’re following my instagram then you will know that I have been very vocal about my new library card recently as it’s allowing me to read books that I’m uncertain enough about to not buy them. Unfortunately I still can’t say how I felt about An Accident of Stars. It had so many things that should have appealed to me – a complex and delightful fantasy world, a majority of black and LGBT characters  (ranging from bi to aro), loving polygamist relationships and more. Despite all of that, it just didn’t seem to grab me and, ultimately, I decided to stop reading about halfway through.

I love a good fantasy world, and even a cool mutliverse, but there is just something about portal fantasies that I just can’t quite seem to get past anymore. In my younger days I was a big fan of Narnia and Felicity Pullmans Shallot series but I have always preferred a straight-up fantasy world. Perhaps this is due to the escapism this allows, where I don’t even have to think about real-world problems, i can’t say, theres just something about them that irk me.

The matriarchal society of the Vekshi was very well thought-out and actually removes some of the issues that i have with books like The Beauty, as women are considered stronger because they bear children and therefore they are more able in battle. However, once again there is no room for passivity and weakness, and men and boys are looked down upon as effectively useless, which is a shame.

All of these are things I probably could have gotten through if it weren’t for several formatting issues that I just couldn’t get past. Conversations were held on a single line, but not always, and occasionally spoken sentences were missing one or both quotation marks. The POV jumped around a lot, which I wouldn’t have minded so much if there was a paragraph break between the different POVs, instead, I was left with about a sentence or two leeway to try and work out what the hell had just happened and whose POV we were seeing now.

I loved so many of the characters in An Accident of Stars, and there are a lot of characters to love. I don’t know if it’s because some of the character names are similar, or because everyone seems to have three different names depending on who they’re talking to, but keeping track of characters and remembering all their names became very difficult and confusing. This isn’t my first high fantasy novel so I’m usually pretty good with keeping up with ridiculous names but this was… well… ridiculous.

An Accident of Stars is a very character driven-story, which usually I’m all about, as long as you give me at least a sense that something is happening. This novel gave me the opposite. By the time I was halfway through a fair bit of plot had been worked through, in addition to some back-story exposition, but despite all this, I was left with the feel that nothing had happened. The characters in the novel, especially Saffron, also had such a bleak view of the world that I was completely discouraged from continuing. I don’t love an overly-positive main character, but neither do I love constant negativity. Granted, Saffron has a good excuse for her outlook, especially regarding her opinion of men and sexual harassment, but she spends all of her time complaining about being powerless even after she is finally able to respond (read: she punches a seedy classmate).

Even though this is a novel for adults, I think I would have enjoyed this book a lot more when I was younger. It is a very traditional High Fantasy story with more queerness and feminism than usual. I’m finding that I don’t enjoy High Fantasy as much as I once did, perhaps because it can be so very predictable, and I am a lot more discerning now that I’m older. As it was, no matter how much I wanted to like this book in theory, in reality it only provided a weird sense of disconnect that I couldn’t overcome and ultimately, gave up on trying to find.