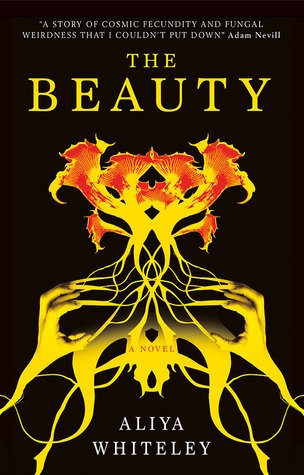 What Happens?
The world has been without women since a plague destroyed them decades ago. But then, in the graveyards and the woods, a yellow fungus begins to grow in the shape of the dead women’s bodies. They are the Beauty and they will be loved. TW: body horror, sexual violence, dubious consent, abuse, mention of homophobia

The Verdict:
I bought The Beauty on a whim, because it promised body horror and gender confusion. I was not let down. The Beauty is horrific in all the traditional terms of the word. It provides both ends of the horror scale – a creeping sense of dread at what humanity can do, visceral violence, and of course, a terrifying and beautiful other. The “other” in this novel is not a racial other – in fact, race is not mentioned at all, and in this new male-only world, doesn’t seem to be a particular issue. What The Beauty gives us is the othering of gender and emphasises how men place women on a pedestal rather than allowing them their humanity, even to men’s detriment. In his early stories the way the main character, Nate, remembers women is falsified. Women are remembered as their ideal or typified selves, even if Nate himself remembers any women as authoritative, it is only through the role of teachers or mothers. When he speaks about them to the other men it is their bodies he talks about first and foremost, then their personalities, which are always gentle and compliant. No wonder the men balk so much at the arrival of the Beauty. The “female” formed fungus’ are closer to the reality of women than their memories, and they are imagined as being similarly compliant, even towards the end once there are only a handful of men left of The Group. Nate’s Uncle Ted maintains that the Forsaken – those Beauty without their men – will not be violent towards him or to his Beauty. How wrong he is.

The Beauty fulfills Freud’s fears that men will be castrated by women, that women will, in effect, turn men into women too – they will lose their “active” parts and the ability to penetrate. Power in this novel, like in Freud, lies in the ability to be an active participant in sex and in roles outside the home. Passivity, childrearing and household chores – “traditionally feminine” roles – are only for the powerless. For all the gender-bending it does, The Beauty still equates what we see as feminine traits as “weaker”, more passive ones. The novel tries to ascribe these traits to men, making them”masculine” traits, while activities such as hunting and providing housing, even being the penetrator during sex becomes “feminine”. It creates conflict between what we, in our current era, see as masculine in contrast to both past and future times. Many of the characters struggle violently against the new definition of “masculinity” and because of their unwillingness to embrace softness as a masculine trait, are unable to survive in the new world they have been plunged into.

Instead of making “feminine” traits powerful, it is those who are weak who give birth, who cook and look after children. The ones who are powerful are those who are active, who chop wood and whose bodies do not change. How much more interesting would it be to create a world where it is those who give birth, where those who are “passive” are the ones who are powerful, and the active penetrator seen as weaker, perhaps because they have never known the terror of giving birth? How much more interesting a world where violence against other bodies is looked down upon in the face of diplomacy and achieving understanding through words and a simple practice of empathy?

However, while bodies shift and change in bloody biology there will always be violence in the world. Women often write body horror about pregnancy. There is a cultural fascination and fear about the biologically female body. The act of birth itself is violent, Thomas’s pseudo-cesarean is described in visceral and bloody terms. It is accompanied by an unnatural love for the infant-tumor that grows and is birthed by him. Both of these things are at the heart of maternal horror. There is the fear of bloody pain that destroys your body, but for many, including myself, the true horror of pregnancy lies in the growth of another being inside you that not only demands your autonomy but your love. To one who has never had children and doesn’t not know if they want any, there is something terrifying in watching someone who may similarly never have wanted children change so abruptly, their body shift and distend as they “glow” and fill with love for a thing they don’t know. Perhaps it is simply societal conditioning that tells us that a mother must love her children no matter what, but it is an exchange that doesn’t go both ways – not when there is so much media displaying an almost expected rite of childhood where the teenager hates their parents.

What The Beauty  does do well, however, is remove the novelty of the male pregnancy. Through the new way of procreation, the novel blurs the lines between biological sexes as much as it does the lines of gender. What society ends up with, at the end of the novel, is a society made from “female bodied” fungus  (that is, they have breasts and round hips) that does not have the requisite “female” sex-organs, and male-gendered people with penises that shrink to nothing and who give birth. It is unclear whether or not the men are able to have more than one child, the story does not go on for that long and so does not explain how reproduction would be possible without the penis – although it does explain that penetrative sex is possible through the Beauty piercing the male’s nipple-like birthing orifice.

In a world without women, the line between homosexuality and heterosexuality is blurred. While the older men still maintain their prejudices, it is mentioned that the teenagers are happy to engage in a bit of casual homoeroticism. However, once the Beauty arrive, heterosexuality and procreation are enforced as the right way of life, and any male-male relationships other than family or friendship are never mentioned again.

The Beauty blurs the lines between so many boundaries – some  better than others. Nonetheless, this novella is a remarkable feat of storytelling and will encourage its readers to question their worldview as well as the status quo of gender in society.

One thought on “The Beauty”

I’ve been letting the titles of my most recent purchases do the talking and this one is no different. Who doesn’t want to read a hot pink book about plants and queer erotica? #plantsex #herebelesbians
What didn’t grab me about this film? The title, with its promise of both lesbians AND vampires, the pulp novel style cover, the fact that it was in the “erotica” section - this is a DVD that drew me in from the second I glanced at it from across the room. I’m extremely excited to watch it sooner rather than later. #vampyroslesbos #herebelesbians
My lesbian husband finished reading this and immediately bought me a copy for Christmas. There is something so special about being given a story that was so powerful to someone. #herebelesbians #stonebutchblues #lesliefeinberg
Wow it has been A Time these past few months, but there are good books ready to read and delicious tea to drink. #herebelesbians
My dears, I have found the single positive to longhaul flights! I read this on the leg between Singapore and Sydney and I'm so glad I didn't try to read it at any other point because I would have been hard pressed to put it down. ❤♡💙 I took this book to Europe with me because I like reading books set in the country (or in this case 1/2) that I'm visiting. Naturally instead I spent the actual trip reading and writing fanfiction and didn't get to this until the plane home. This might even be the book that gets me back into review writing! ❤♡💙 I honestly still cannot get over how awesomely queer this book was, and how nice it was to have a bisexual guy as one half of the romantic couple 😍 i think if my thing wasnt aretherelesbians it would be aretherebiguys and it would be about half as long. . . . #redwhiteandroyalblue #caseymcquiston #herebelesbians
It's #WearItPurple day today and do you know that I don't own any purple clothing?! 💜 I actually starting reading "The Lost Coast" a while back thanks to NetGalley, but the formatting in my kindle app was so warped it was really hard to read. Thankfully I now have this beautiful hardcover so I can finish what has promised to be a fantastic story. . . . #thelostcoast #amyrosecapetta #herebelesbians
%d bloggers like this: