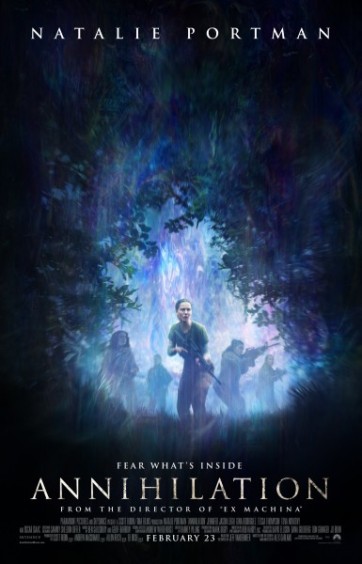 What Happens?
After a man returns from what was assumed to be a suicide mission, a team of female scientists are sent into an Area known as The Shimmer to find out more about it.

The Verdict:
I have been wanting to read Annihilation for quite some time now, so I was very excited to discover it was being made into a movie. I’ve discovered that my preference is to watch a movie without knowing much about the plot – it means I have very little expectation and everything is new and exciting. With book to movie adaptations, this also means that I’m not constantly comparing the two and detracting from my enjoyment of the movie.

Slow and methodical, there is nothing in Annihilation that isn’t there for a reason. There is no final moment of complete catharsis, rather there is an unsatisfying decrescendo that leaves the view with more questions that answers. It isn’t a loud film and sounds like gunfire are slightly muted. Likewise the little music that plays throughout the film is contemplative and often only made up of a few repeated chords. Combined with the refracted lighting, this lends an underwater or dreamlike quality to the film that enhances rather than hinders the use of CGI. I kept thinking that the landscapes would be fantastic to explore in a game and the mutated creatures encountered in The Shimmer would be amazing, if terrifying to deal with up close. Annihilation is explicitly beautiful. It presents a world where nature is running its course, and changing the world before it. I have a strong love of films and games like this where plants have taken back what humans built. The contrast between natural and constructed materials is deeply satisfying to my sense of aesthetic.
The cast is small and made up almost entirely of women, which, naturally I loved.  Natalie Portman makes up the majority of the screentime which is something I’m certainly not complaining about, and there are great swathes of the film where men are neither talking nor present. It was quite wonderful. It is such a wonderfully woman-centric film, with both a latina and black woman in leading roles. Annihilation is also a bisexual smörgåsbord. The lead is played by Natalie Portman, with her husband played by Oscar Isaac. I’m unsure if Anya (Gina Rodriguez) is supposed to be a lesbian or bi or what, as she hits on Natalie Portman but is also described as hitting on everyone before entering The Shimmer. She has a certain butch swagger about her however, which had me mentally casting her as a lesbian before she even opened her mouth, and I will now die by this theory because I love her. I can already see myself writing future essays that prove my point. I feel that with a cast full of women, Annihilation  is set apart from so many similar adventure/action movies that have come before it. Unlike a film such as Predator, Annihilation isn’t about the explosions or man vs beast monster hunting. It is about what defines us, and what we will do when faced with the unknown.
There is definitely a horror element to the film, particularly body horror, as Annihilation deals with the concept of mutation in all its forms. This leaves room for both extremely beautiful landscape shots on which the camera lingers, and some genuinely terrifying creatures – both physically and conceptually. A certain scene with a bear mutation actually had me shaking a little bit, it was so tense! I don’t think I’ve ever been that genuinely horrified by a movie before. There is a level of comfort to knowing from the beginning that Natalie Portman survives, but of course the real question here is whether or not she is the same person she once was.
Ultimately, the film asks who we are as people and asks us what sets us apart from other people. It is an existential nightmare wrapped up in a visually and musically beautiful package, and I can’t wait to read the novel and then watch it again.

One thought on “Annihilation”

I’m nearly 3/4 through the last book in this series and trying to decide if it’s worth appeasing the completionist in me and continuing the slog. Being an old fantasy series I thought I was prepared for the racism but the last book really ups the ante - complete with actual black face and whole paragraphs about how complacent and “dull-witted” the asian-coded race is. Sometimes it’s easy to just kind of roll your eyes with some of the classic fantasy series’ but I’m reaching my limit... maybe I should just go straight into my planned reread of Akwaeke Emezi’s Freshwater.
Its gonna be a cozy day ☕️
Im going full comfort-read 🥰
I could have sworn I’d already posted these but... anyway I’m nearly finished a conjuring of light and OH BOY has it been a time!
New month new books to read
I love takarazuka (tha japanese all-women theatre group), so I was very excited about this manga featuring an all-girls theatre school. It’s been a while since I’ve read any manga too so let’s get back in the habit! 💪
Loading Comments...
Comment
×
%d bloggers like this: